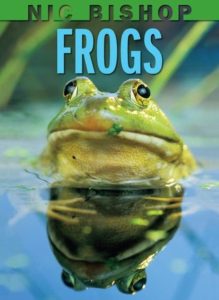 A few weeks ago, I had the honor of reading aloud Nic Bishop’s Frogs to kindergarten students on the south side of Chicago. When I visited the school initially, I engaged in an informal reading conversation with three of the students, reading aloud sections of a book about penguins to them and assessing what they were learning. I quickly realized they didn’t understand words like “diving” (penguins dive into the water) and “sliding” (penguins sliding on their bellies across the ice). I chose Nic Bishop’s Frogs for the lesson because it’s a fascinating text that reveals the diversity of frogs’ features and the photographs easily capture students’ attention (K-5). It’s a rigorous text for reading aloud to these students. My goal, though, was not for students to understand every single fact in the text, but to begin to develop an ear for what these texts sound like and to identify what they were learning about frogs. During the lesson (as described later), my objective actually narrowed when I realized how powerful Bishop’s word choice is in describing the frogs’ movements and this became the focus of what I wanted students to learn from the text.

I started by showing several of the photographs to the students (who were all seated on the carpet in front of me). They would give me a thumbs up or down if they thought the photos were fascinating. Then I asked if they’d like me to read some of the text with those photos. I never planned to read the whole book to the students – it’s too long and they need to develop stamina for that. The beauty of informational texts (non-narrative) is that you can skip around like this; this is even easier when you, yourself, know the book well.

As I read aloud the running text to the students, I highlighted the action words that surfaced – frogs climbing, pouncing, ambushing, gliding and we acted these words out with very simple, quick gestures. (Note: I’d read the whole page or paragraph and then go back to highlight the word.)  There was no getting up and making a huge fanfare of this because I didn’t want to stray too far from the time with text. Each time I introduced a new action word and gesture, we would repeat the previous words as well. The students started to recognize when there was a new action word and their eyes would widen, ready to demonstrate the new word with some type of gesture. By the end, we had a long string of action words, each with a physical action to describe frogs’ movements. The beauty of this is that these words will surface in other books describing animals as well – and, hopefully, the students’ conceptual understanding will transfer. Ideally, this read aloud would be part of an integrated unit of study on animals – maybe animal adaptations, for example.

We also engaged in shared writing and because of my focus with them on action words, these words surfaced in what they had to contribute to our conversation and writing. See the image below. 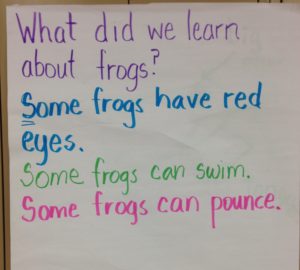 The trick is to move students to sketching, labeling and writing on their own – facts they learned about frogs. My suggestions for this are sketched on the chart paper in the image below (as part of a conversation with teachers who observed and co-taught during this lesson). You can assign these responses (hand out response sheets) based on the needs of the child. It’s important to model at some point – how to engage in these kinds of responses. I actually did some sketching and labeling as part of this lesson – but it was misguided. I focused on sketching a frog and labeling its body parts – when I should have figured out a way to sketch and label movements – to stay true to the objective that emerged during the read aloud. 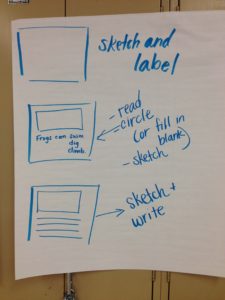 There’s so much to say about this imperfect lesson. I initially thought I’d just be teaching for recalling details from the text – “What did you learn from the author? What is the author trying to teach you about frogs?” I thought I’d read aloud some and then demonstrate learning from one page, but the students had a hard time focusing on one page of text after discussing so many pages. So I followed their lead and also what I knew they needed to learn by focusing on identifying the actions or different types of the frogs. As I stated earlier, I felt like my sketching demonstration led away from what was the focus of the lesson as well. Oh, and a multitude of other points.

In the end, I observed the students using the words we’d focused on, acted out, repeatedly  – in the context of reading a beautiful informational text – in their conversations with partners, during the shared writing, and during discussions with the teachers who picked up the teaching with small groups (after my part of the lesson).