Observing for what students are “not saying” during conferences

During conferences, I listen to what students are saying but I also listen for what they are NOT saying.

For many students, when you ask them to tell you what they have learned from a complex informational text (or a part of a text), they will talk about content they understood without you. Rarely will they say, “I didn’t understand this part.” Instead we have to figure that out for ourselves and then teach at that point.

This could be as easy as noticing which details (or words) in the text are not part of what the student says.

I led a small group lesson with a group of students reading a NEWSELA article about the Ocean Cleanup Project’s attempt to clean up trash in the Pacific Ocean with an innovative contraption. As I leaned in to confer with individual students, I noticed a pattern. Each student left out a key detail, a detail that is important to what the author is saying. Below I describe each conference and what the student and I did together to make sense of the missing detail.

Text: The project is the expensive, untried work of a 23-year-old Dutch college dropout named Boyan Slat. He was so disgusted by the plastic waste he encountered diving off Greece as a teen that he has devoted his life to cleaning up the mess.

Teacher: Tell me about what you learned in this paragraph.

Student 1:  He wanted to get rid of the trash. 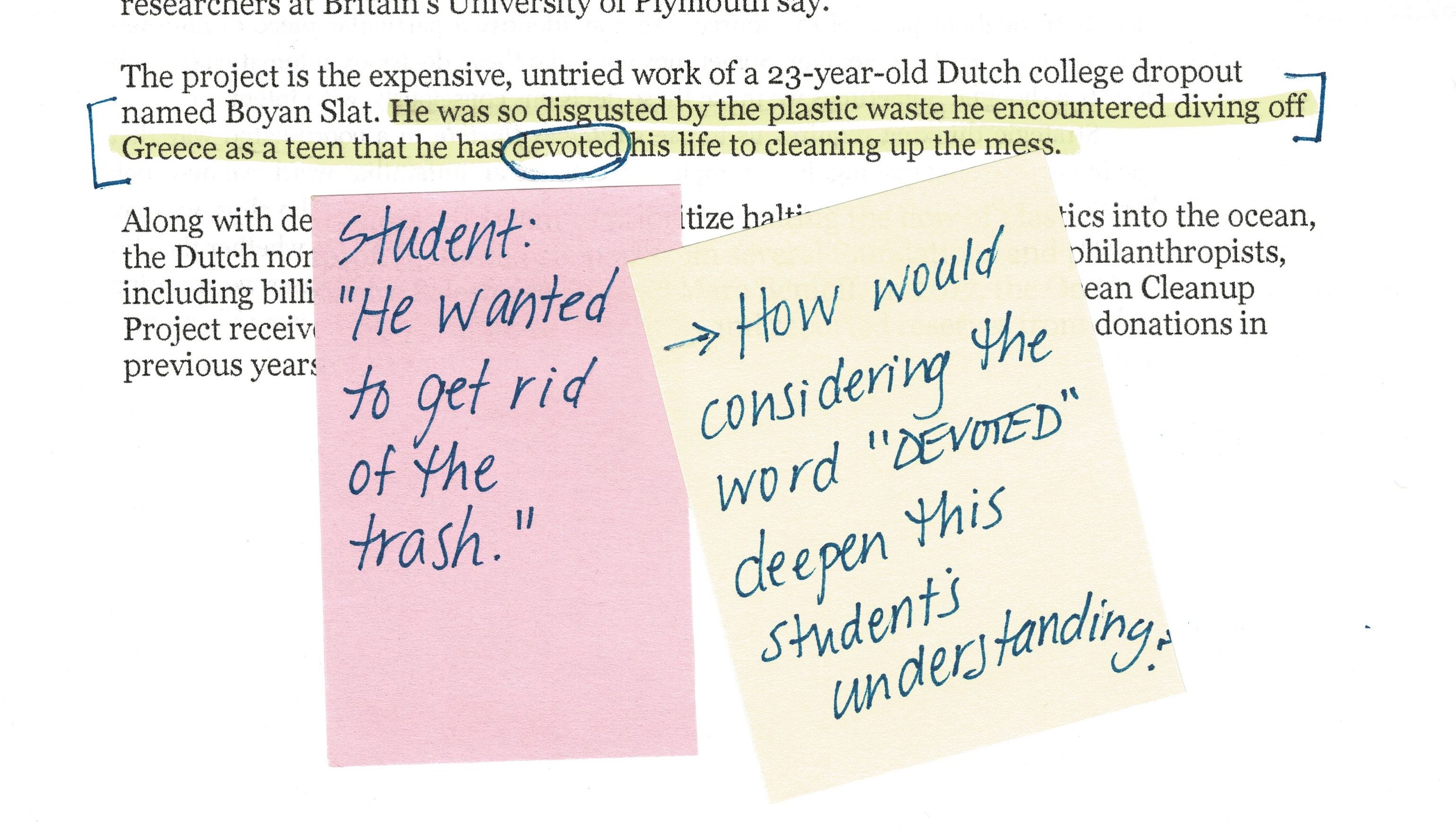 The student and I thought aloud about how “devoted” is more serious than “wanted” and changes the weight of the author’s statement. We also discussed how noticing that one word deepened the student’s understanding of what the author was saying.

Excerpt of Text:  Along with detractors who want to prioritize halting the flow of plastics into the ocean, the Dutch nonprofit gathered support from several foundations and philanthropists, including billionaire Salesforce founder Marc Benioff.

Teacher: Tell me about what you learned in this sentence.

Student 2: A lot of people gave to the project.

I noticed that the student generalized “people.” There’s a LOT to make sense of in this sentence, but what if we just conferred about the weight of the word “nonprofit“? 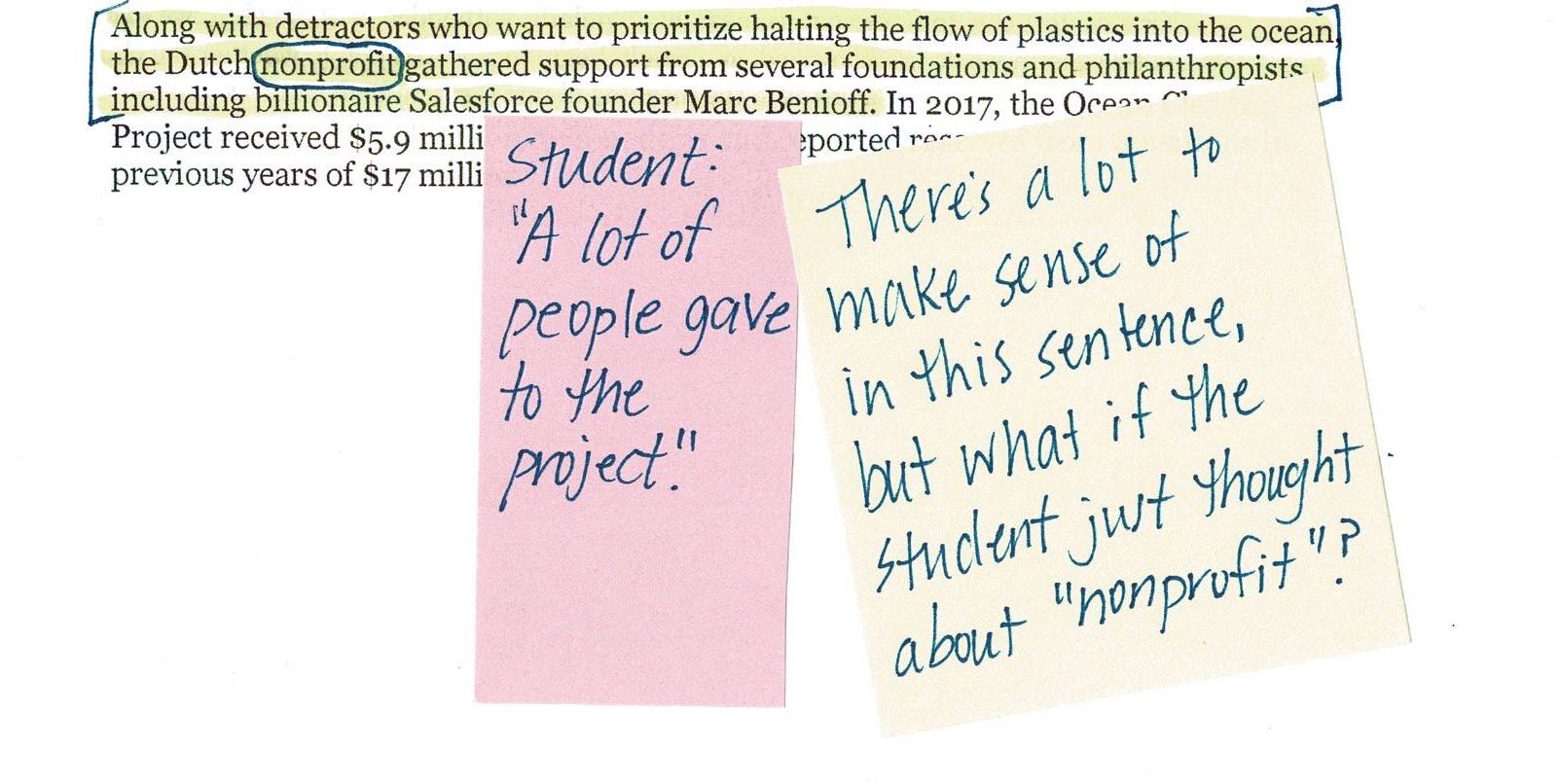 Together we made sense of the word. The student knew “non” was a prefix that meant “not” and she knew that “profit” meant “for money.” Then we thought about what that meant – that some groups that gave money were not-for-profit or groups that do work without an eye on making a lot of money. I closed the conference by asking her to think about the understanding she gained by noticing and thinking carefully about the role of this one word.

Text:  Plastic is different than other trash because it never decomposes. While it breaks down into smaller parts called microplastics, they never become bioavailable, meaning they can never provide nourishment to marine life.

Teacher: Tell me about what you learned in this sentence.

I noticed that the student was using “trash” as a synonym (perhaps) for “plastic.” Why is it important for the student to notice the word “plastic” when I ask her to reread the first sentence? 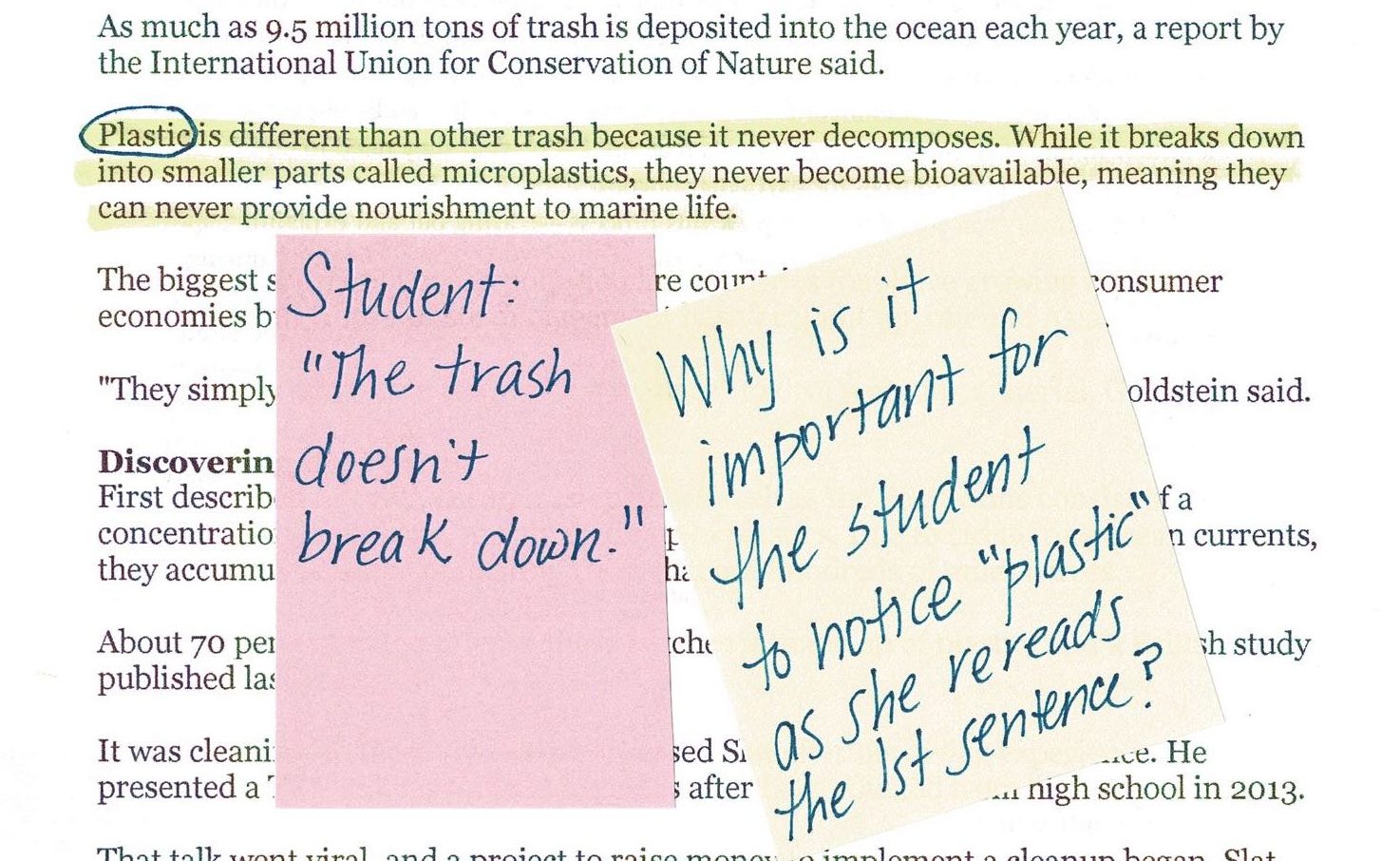 She inferred that plastic is just one kind of trash. We talked about the value of noticing that one word – “trash” in the first sentence and how it changed what she was understanding.

Teaching Point – At the end of this lesson, for the teaching point, I started by saying, “Several of us noticed the power of one word to deepen our understanding of the source today. Who can tell the story of how they did this?” Then I supported each of the students as they described the strategic processing we’d engaged in during the conference.

SO FUN!!! Such a blast to see the light go on for these students and then to see their enthusiasm as they shared their stories.