Is “text evidence” becoming a fill-in-the-blank? 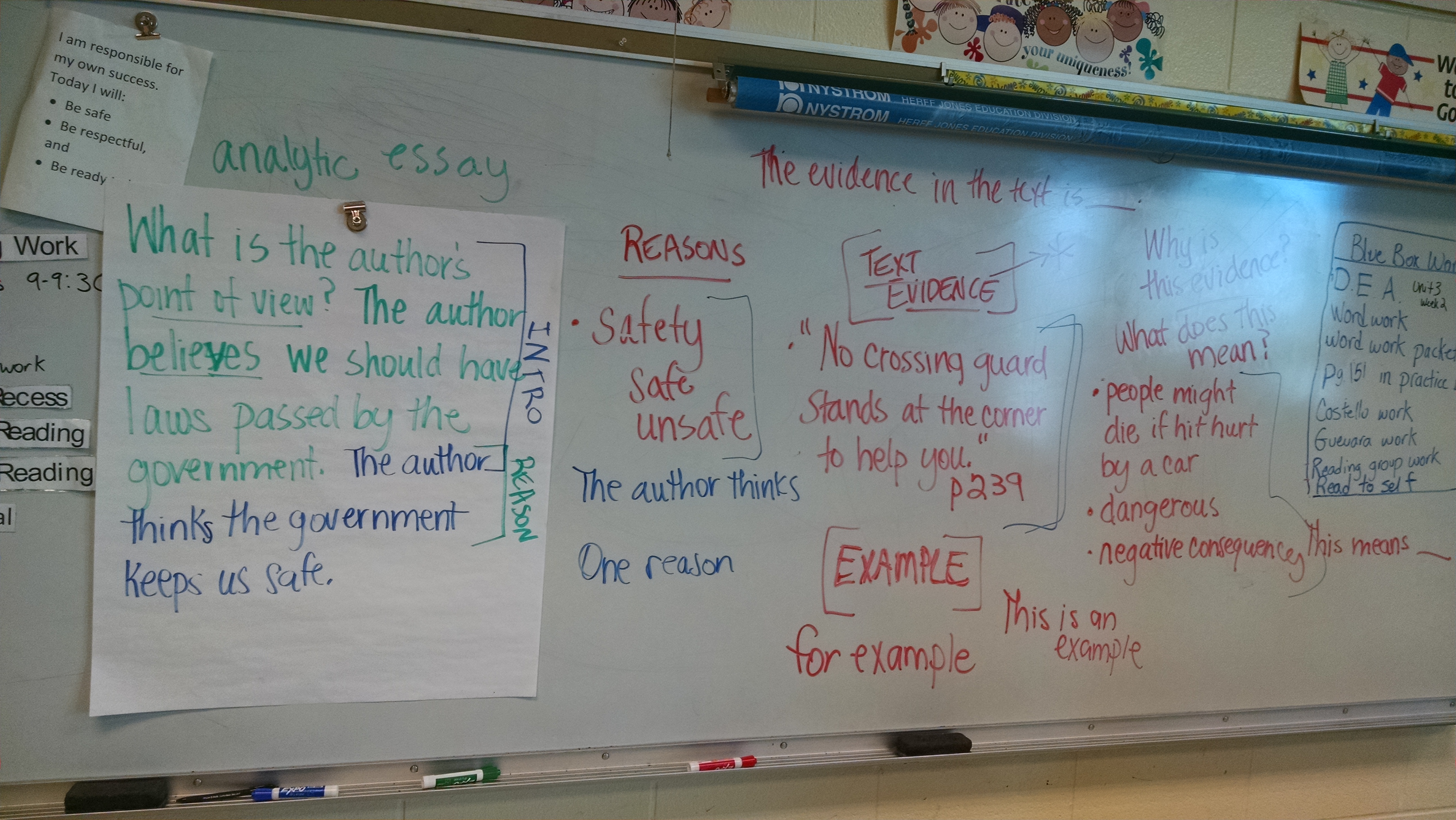 A few weeks ago I had the honor of working with a class of students who were writing an analytic essay in response to a text about Frederick Douglass. During this lesson, I’d posed a text-dependent question and we’d carefully read the article and taken notes.  When we moved from taking notes to using those notes to think about writing, I asked the students, “How should we start our essay? What do we need to think about doing first for our reader?” (In my mind, I was thinking, “We need to let the reader know the topic” or “We need to write an introduction”). Several hands went up, but one student’s hand shot up especially straight, her eyes wide and bright with a response. Pleased at her eagerness, I called on her. She quickly shouted, “TEXT EVIDENCE!”

No kidding. And this happened again later in the week in a different class.

For me this is worrisome. I worry that we are talking about and hammering “text evidence” so hard that students are becoming mindless, thinking that “text evidence” is the most likely answer to whatever question we ask. This mentality is popping up in their writing, too. “And the text evidence is….” is part of their responses as though they are filling in a blank. I don’t think we meant for this to happen! And I’ve been pondering how we can turn this around for students and keep them in the mode of “I need to think through this-I need to reason through this-I need to think about why I’m thinking this.”

1.  If you are asking students to share textual evidence, the text-dependent question needs to require some kind of inference or interpretation of or grappling with ideas in the text; the answer should not be is stated explicitly in the text. For example, in the Frederick Douglass article, the students read–the question written by the publisher was “What did Frederick Douglass do to change the lives of African Americans?” This was answered clearly in several spots in the text — he spoke in front of audiences, he wrote his autobiography, he started a newspaper. I wouldn’t ask for text evidence to this question–why? Because the response would be, “Well it says it in the text.” Instead, a better question would be, “What character traits did Frederick Douglass exhibit in his advocacy for African American rights? What makes you think so? Use textual evidence to support your reasoning. Remember to explain why this is evidence that supports your reasoning.”

2.  Ask students to explain why text evidence is evidence that supports their reasoning–out loud with a partner and in writing. Hopefully, this forces them to think about what they are saying, to think through their reasoning. Below is a chart from a 4th grade lesson. This was from the shared writing portion of the lesson – we collaborated to develop a reason and identify evidence; then I asked small groups to talk about why this was evidence and then write on their own notes (a blank piece of paper folded into thirds). 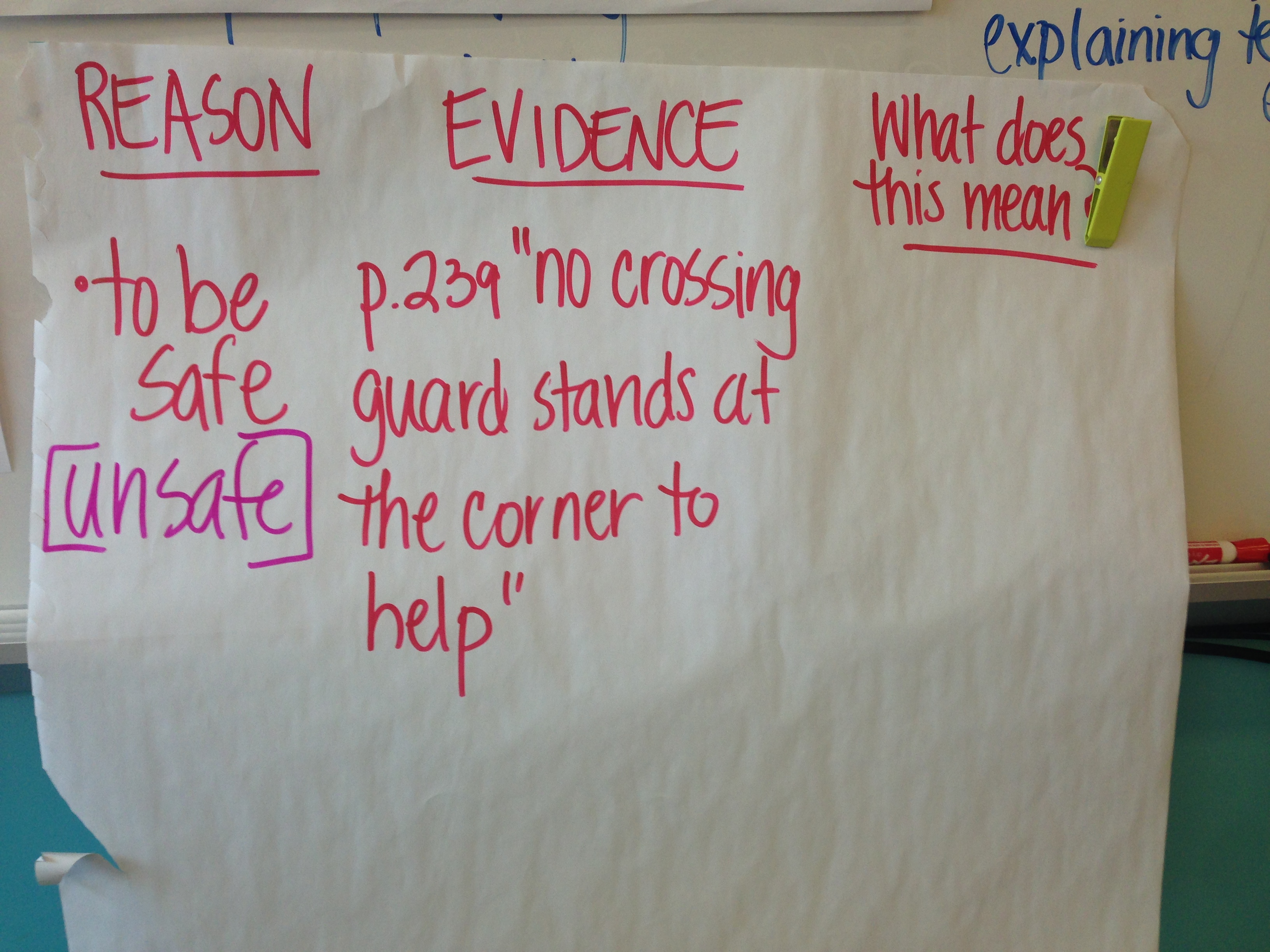 In a fifth grade class, we used a piece of paper folded into thirds to take notes. Below are the shared writing notes that we composed together before the students were gradually released to take notes on their own. This particular piece of paper was under the doc camera and projected for all students to see. 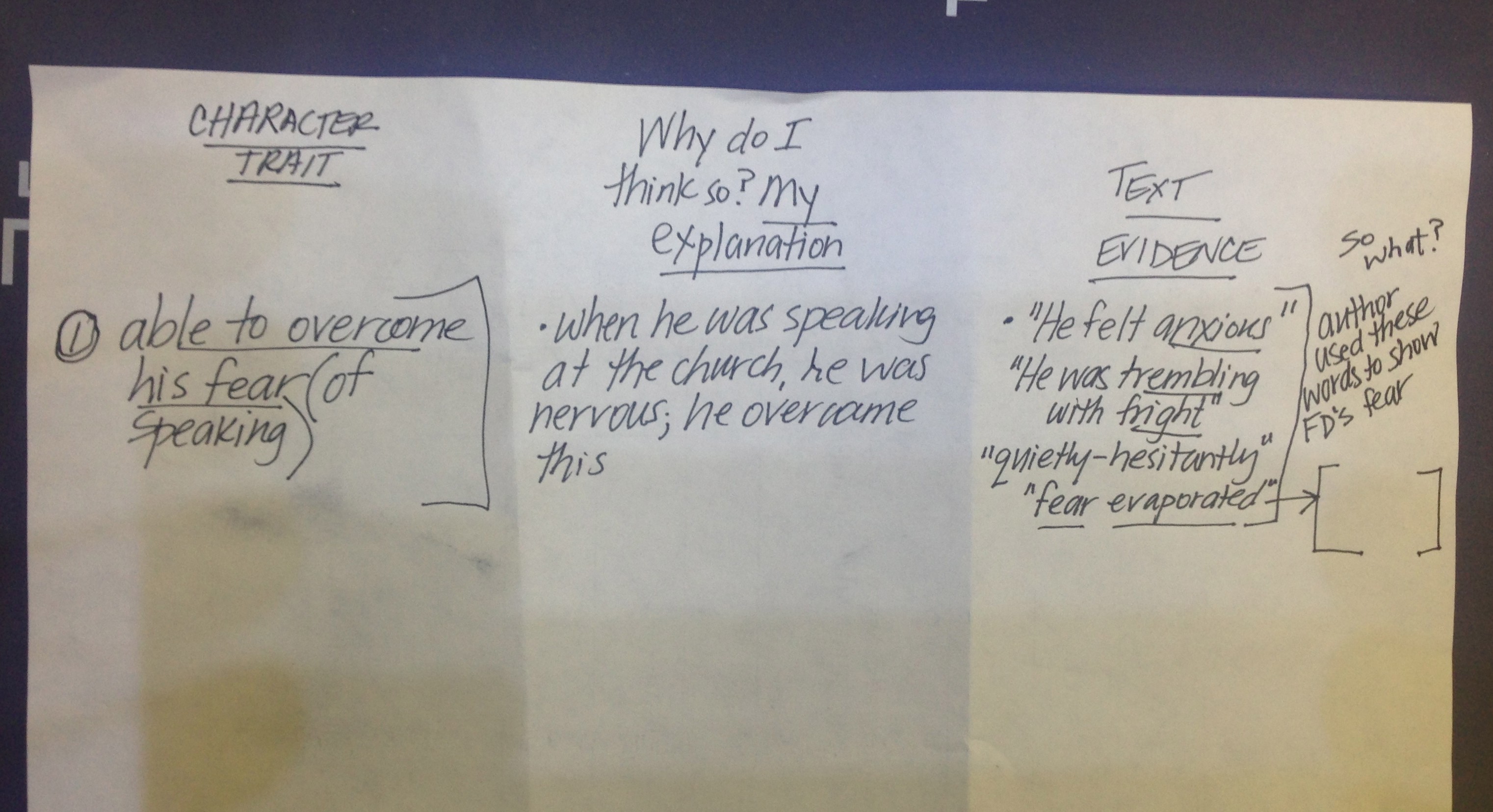 4.  Provide lots of opportunities for students to just talk through their reasoning and thinking about textual evidence. This may eliminate some of the “fill-in-the-blank” language that is popping up in essays.

5.  As needed, provide language for students to appropriate in their discussions and their writing like:

6.  When you start to see mindless use of phrases like “In the text it says…,” BAN those phrases and ask, “How else can you say that?” or “What are you trying to say? Let’s think through this and consider a different way to reveal this to our reader.” In one classroom, I wrote “The evidence is” on the board and drew a ban sign around it! The students gasped aloud!

7.  Reduce the cognitive load. Provide the answer to the text-dependent question and the reason and let the students just focus on grappling with identifying and explaining text evidence – orally in small groups and then in writing. It seems like we always start from the beginning in writing analytic essays. There’s no reason why we have to do this.

8.  Limit the use of formulas for writing responses.

9. Go through the process of reasoning and supporting for yourself or with a group of colleagues. I know we are crazy busy, but for many of us, this kind of thinking and writing might be less familiar. How would you answer the text-dependent question? What reasoning would you give? What would be your text evidence and why? Do it for yourself so you can coach students in thinking more deeply about what they are doing. Below are notes a group of teachers and I created in preparing to teach a lesson. 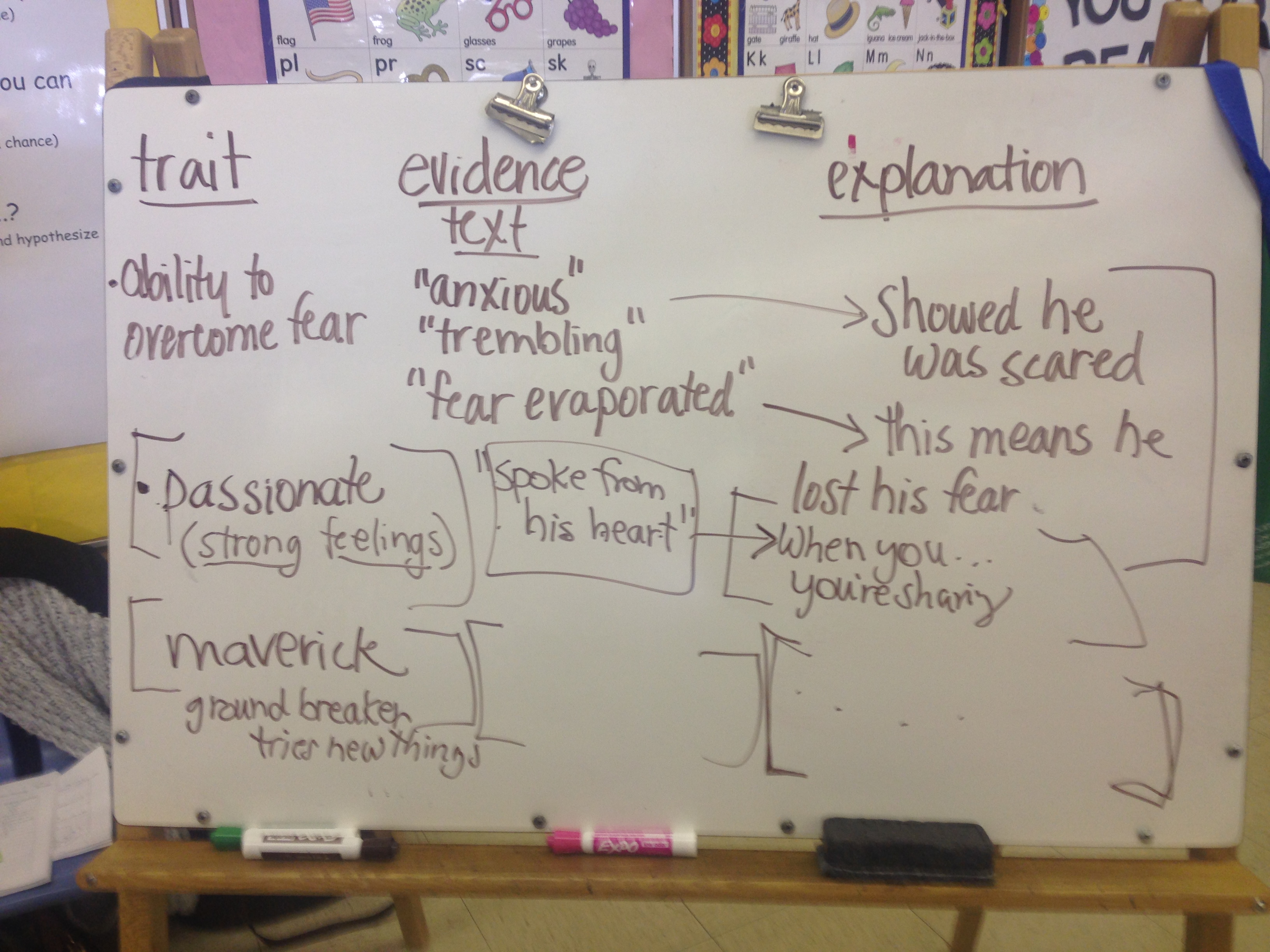