Book Review and Prompts – Call of the Klondike 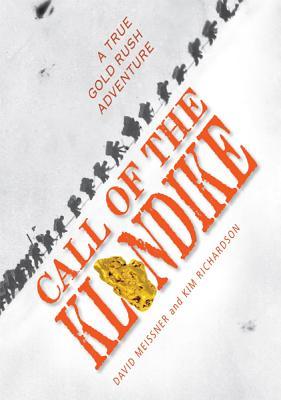 Call of the Klondike: A True Gold Rush Adventure (Meissner and Richardson, 2013)

I’d recommend this book for a a nonfiction literature circle in grades 5 (savvy readers) through 8 (striving readers). It would also be worthy of doing a book talk and placing in a prominent space in the classroom library –in hopes that a student will pick up for independent reading. The authors have done a fabulous job of tapping and integrating primary sources “to tell the story of” two men’s journey to the farthest reaches of the gold strike in the late 19th century – territory near the rugged Dawson City in rural Canada.

In the summer of 1897, Stanley Pearce and Marshall Bond, two college friends, were in Seattle when gold diggers returned with a plethora of nuggets. They immediately touched base with family about financing a trip up north. Bond kept a diary and both wrote to their parents. These primary sources along with telegrams and news articles (written by Pearce) were preserved by family members and landed in the hands of Kim Richardson, a co-author.

The text is almost equal parts narrative/informational text written by the authors and primary sources--woven together in a seamless narrative along with maps, photographs, and other 19th century sources of print. The appeal of the narrative is in the harrowing moments of Bond and Pearce’s party’s trek across the White Pass Trail (where there was not a clear path and it was already snowing) and the ride down the treacherous Whitehorse rapids–all with a year’s worth of provisions! Then there’s the continuous exposure to severe weather and the many times futile attempts to discover any gold – all with a ton of work and an unexpected ending.

This book would be a great way to immerse students in reading primary sources – sources that are a little more accessible than say the Declaration of Independence – without a ton of support from you, the teacher. This is an important part of the Common Core ELA/History-Social Studies standards like –

These questions could conceivably be asked at multiple points in the text.