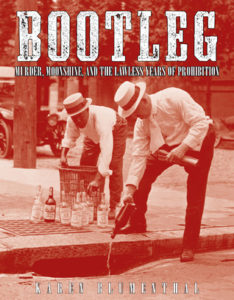 Blumenthal’s writing is always solid and her research is exquisite. Bootleg: Murder, Moonshine, and the Lawless Years of Prohibition (2011) is no exception. This would be a great read for students who are researching prohibition or this time period and wanting lots of juicy-interesting details. Blumenthal’s purpose is to explain the many, many factors involved in the passage of the Eighteenth Amendment and then in the repeal of this amendment as well. She employs an enumerative/chronological text structure. Some chapters include many anecdotes and others focus on groups or individuals like Carrie Nation who fought for Prohibition (including throwing rocks in saloons and breaking mirrors and windows and all) and Al Capone, who became wealthy selling alcohol to those he ignored Prohibition. So the book is in time order (chronological text structure), but she picks specific aspects, groups, people to highlight in particular chapters (enumerative text structure).

Blumenthal cues the reader to significant shifts in the movements or in this time period. For example, on page 46, she writes, “Though the law passed, it was never officially enforced, and some saw that as a failure. but the Anti-Saloon League saw something much more significant: It had votes.” Students might do a close read of this page and other excerpts as they think through how Blumenthal engages in thematic progression – how she moves the “story of…” forward.

At the end of the book, Blumenthal shares a bit about her research and then lists tons of resources (categorized by sub-topic) that students can consult for more information on a particular aspect. It’s clear that she had to synthesize a massive amount of material to write this book.

Blumenthal’s book is the kind of book students need to read to reach any depth in understanding of historical and other content area topics. My worry – students will not pick this book up for independent reading. I’ve been grappling with how much I love books like this one, but how little interest students have. For this book, I think there would have to be engagement in a intellectually stimulating unit of study for students to pick this up. A nonfiction literature circle might find a lot to talk about with this book as well. I think if they got started reading this book, they wouldn’t want to put it down.