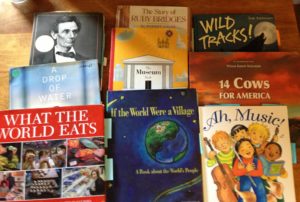 Below are thoughts – including notes of caution & outright rejections – on the “exemplars” listed in Common Core Appendix B for Grades 2-3 Read Aloud Informational Texts. At the bottom is a link to a PDF with more extensive notes about the texts’ topics, central ideas, structure and coherence.

IMPORTANT to remember about exemplar texts –

REJECTED – TOO EASY – The Story of Ruby Bridges by Robert Coles – I know this is a classic, but, in addition to being dated as far as accuracy and authority,  I think it’s way too easy for 2nd/3rd grade listeners. ALTERNATIVE TITLES AS EXEMPLARS –  My Brother Martin: A Sister Remembers Growing Up with the Rev. Dr. Martin Luther King by C. King Farris (2nd grade) and Through My Eyes by Ruby Bridges (3rd grade)

REJECTED – AS READ ALOUD – too hard for students to see images – Ah, Music! by Aliki. There are too many small illustrations for this to be a good read aloud – to a traditionally large group of students. Even putting the text on the document camera – there is just too much going on – on each page. You want to avoid using these kinds of books – “illustrated guides” as texts for reading aloud. Not a good example.

Okay…more to come. I’m working my way through all of the exemplars as part of my next book…hoping to have better set of exemplars to recommend in general somewhere along the way. Remember – see PDF link below :).