Read This Book on Titanic Not That One 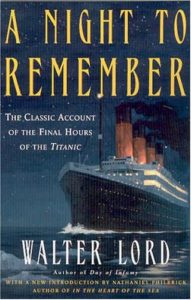 A Night to Remember (Lord, 1955) is listed as an exemplar text in Appendix B of the Common Core. It’s okay, but not stellar. Instead I would recommend reading Titanic: Voices from the Disaster (Hopkinson, 2012). It is a better exemplar of what 6-8th grade students should be reading. See my blog on Hopkinson’s book for more of my thoughts on this gripping, well-written book. 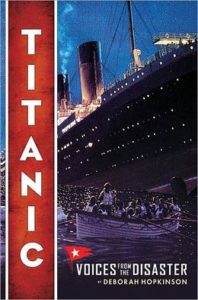 1) On page 76, Lord writes “George Q. Clifford of Boston had the rueful satisfaction of remembering that he took out 50,000 dollars’ extra life insurance before the trip.” Clifford did not survive. So how do we know this?

But two paragraphs later he writes – “Little things could return to haunt a person at a time like this. Edith Evans remembered a foretune-teller who once told her to ‘beware of the water (p. 76).'” The word “could” is key here – he is probably using someone’s recollection of a conversation with Edith (who did not survive) and conjecturing, but he qualifies that it is just conjecture with “could.”

2) Throughout the book, Lord sheds negative light on women’s role in the event. At one point, when he is writing about one of the men trying to get the women to step into the life boats, he states, “Andrews had good reason to be exasperated. Women were never more unpredictable.” Throughout the book, women are portrayed as helpless and passive and the men mostly as courageous, solid and firm. Lord wrote this book in 1955 – before the second wave of feminism (which began in the early 60’s). While Lord portrays himself as a writer who is narrating the facts of an event which he has thoroughly researched, his prejudices are still present to some extent. It reminds me of author Jim Murphy’s comment in The Great Fire (1995) about the perceptions of the males who wrote about the great Chicago fire – “Men who wrote about the Great Fire generally portrayed women as passive and helpless, waiting for their husbands, brothers and some other man to save them. This seemed to go doubly for women who were wealthier. But if we look beyond the condescending references, a remarkable picture of strong and very active women emerges…” (p. 91). Lord might be guilty in a similar way. Let’s remember he’s narrating as fact what was really just the perceptions of survivors about what happened (as revealed in transcripts from hearings, in interviews with him, in letters, etc.) and he chose what details to share based on his perceptions of reality as well. (This would make for a very good conversation amongst students!) Late in the book, he comments about how some women rowed the oars of the life boats and one even steered, but his statements are too little, too late (for me).  Just skimming Hopkinson’s book – her language is very different – I need to reread again with this lens in mind – but I’m fairly certain her language choices regarding women’s responses and actions are more neutral. This would make for an interesting close read – contrasting excerpts from the two texts and discussing how women are portrayed through choice of language and details to share.

Okay…just my thoughts. Not a bad book. I just think there are better, more current choices. Hopkinson’s book wasn’t out when the exemplar texts were chosen and there probably would have been copyright fees the CCSS writers didn’t want to deal with when they chose excerpts so we got A Night to Remember instead.