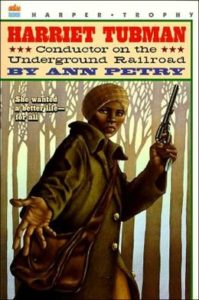 While there might be value in reading this book to get a “feel” for Tubman’s life, it should be considered historical fiction not nonfiction (despite being listed as an exemplar informational text in the CCSS Appendix B). It was written in 1955 and Petry’s purpose was to provide readers with a viewpoint of slavery that was not being represented in textbooks of the time. Her purpose was noble and should be noted. What writers in the field have agreed on since then, though, is that to be accurate when writing “nonfiction,” you cannot make up what was said during an event in a person’s life – without asserting that you are doing just that. You can use quotes from primary sources or from people you’ve interviewed during your research, but you cannot just make up what might have been said (even if it’s based on research) and present these conversations as fact. If you read Russell Freedman’s book Lincoln: A Photobiography – he tells a lot without ever making up what someone said. Petry, on the other hand, from the beginning of Harriet Tubman, writes specifically what was said during a discussion that took place in Harriet’s parents’ cabin the night Harriet was born and continues to do so from there. There is no documentation of what was said -specifically at events like the night Harriet was born. Petry is conjecturing. This is not acceptable in 2013  – despite this book’s continued publication as “nonfiction.”

Petry does end each chapter with factual statements about other events that were occurring during a particular period. At some points late in the book, she includes quotes by Harriet and a few others, BUT the majority of the book is a narrative that includes what was happening, being said, and so forth without reference to specific documentation or quotes from primary sources. It’s clear Petry did some research – although there is no author’s note included in the book. She passed away in the 1990’s and I haven’t found any kind of description of her research on-line so it’s hard to know her research and writing process for this book. 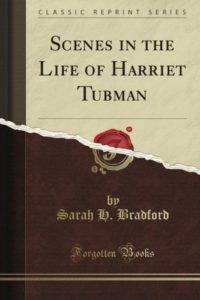 I want to contrast her book with others on Tubman. For example, I want to read Scenes in the Life of Harriet Tubman by Susan Bradford – who knew Harriet and interviewed her extensively for the book (to raise money to support Harriet). I’d also like to read two more authoritative books – Harriet Tubman: The Road to Freedom by Clinton and Bound for the Promised Land: Harriet Tubman, Portrait of a Hero by Kate Clifford Larson. While the first book by Bradford was criticized for accuracy – it is based on the perceptions of Tubman (who did not know how to read and write). This text might serve as a primary source that represents one person’s viewpoint – similar to Frederick Douglass’ autobiography Narrative of the Life of Frederick Douglass.

If students do read Petry’s book – there’s room for teaching about an author’s interpretation of historical documents and how that influences what is written, what can be written from our study of primary and secondary sources and what cannot be written without some assertion from the author that the text is an “interpretation” or “conjecture” of what might have happened. In addition, Petry’s book could be contrasted with others – a good learning experience for students and a way to help them achieve Common Core standards related to contrasting multiple texts on the same topic.