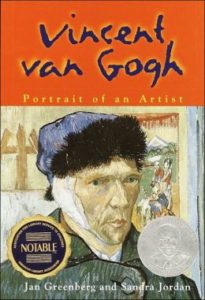 So I’m reading all of the texts on the Common Core Appendix B Exemplar Informational Text list. My reading is focused on what makes these texts rigorous for a particular grade band, what makes them hard for students, what do we need to think about when students are reading texts like these with a lot of guidance or independently with some coaching. Vincent van Gogh: Portrait of an Artist (Greenberg & Jordan, 2001) is one of the exemplar texts listed for 6th-8th grade history/social studies. Now – I want to remember that these are simply “exemplar” texts – they are not to being suggested for adoption. But at the same time, reading this text (and the others) has been a good exercise for me in thinking about the kinds of texts our students should be grappling with in school and be able to read independently at some point.

What have the authors done to make Vincent van Gogh (2001) accessible to students?

So what makes Vincent van Gogh: Portrait of an Artist (2001) a challenge for students?

Suggestions for scaffolding students who are reading books like this (or this book :)) –

Just a last thought. I don’t know any middle grade students who would pick this book up independently and who would stick with it if they did. I just doesn’t strike me as an engaging read. Nevertheless, students need to read these books. So what to do? I’m thinking about it. At the least, it should be part of an integrated unit of study – on that time period during Europe, on post-Impressionists, on the past and the present in art. Something.

Okay…finished another exemplar text today…Harriet Tubman: Conductor on the Underground Railroad (Petry, 1955!!!!!!) and working on Narrative of the LIfe of Frederick Douglass (Douglass, 1845!!!!) If you know me, you know I’ll have a lot to say in a blog about these in the near future.