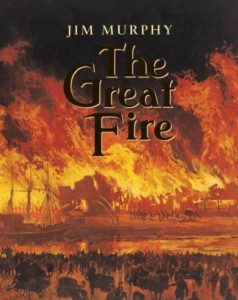 The Great Fire (Murphy, 1995), a Newbery Honor Book, is listed in the Common Core Appendix B as an exemplar text for 6th-8th grade reading. Filled with black and white photos and illustrations, this isn’t a book that is immediately appealing like some other titles. If you can get kids to start the book, though, they will be pulled into the gripping narrative Murphy has created describing the devastating fire that raged through Chicago in the fall of 1871. As a result, the students will have experienced a text that is appropriately complex for their age.

As I read this book, I thought about how I might support readers. Conceptually, Murphy tries to get at more than a timeline of events that occurred during this fire. At the end of chapter one, Murphy writes, “What followed was a series of fatal errors that set the fire free and doomed the city to a fiery death.” Errors or flaws and effects are threaded through the rest of the book – this could be a helpful lens for readers, a structure of sorts to guide their thinking. Murphy continues beyond chapter one to identify specific “errors” but gradually actions are implied as errors – requiring the reader to think critically without scaffolding from the author.

Another, more sophisticated theme is the gap between the wealthy and the poor classes of Chicago. Murphy reveals how this fire served as an equalizer. Obviously, fire destroys anything in its path – mansion or shack, but the response of the citizens was revealing. There was chaos and panic everywhere. Murphy specifically points out how some citizens, who had previously denigrated the poor were shocked by the behavior of the citizens, regardless of class – both selfless and self-centered. This might be a good theme for a group of students to discuss with an essential question like, “Why is this important to consider?”

There were several Tier Two vocabulary words that emerged in my mind as I read – these are words that students need to describe the bigger ideas in texts – futility, perseverance, humanitarianism, displacement, compassion, courage, vulnerability. If there’s a small group reading this book, you could explicitly define these words and discuss textual evidence regarding the actions of citizens or the events in the book that reveal these concepts. These words could serve as a lens for writing in response to this text. Transfer of learning could occur as students use these ideas to interpret information in other books they are reading.

Students need to also think critically about how Murphy portrays many of the details as “perception” – of those who wrote letters later or who wrote in their journals after the event or how Murphy reveals he is interpreting historical documents. This creates authority for his text. Students need to keep an eye out for statements like “It can be reasonably assumed that she was surround by a…” (p. 82) and “men who wrote about the Great Fire generally portrayed women as passive and helpless…but if we look beyond the condescending references…” (p. 91). This might also serve as a mini-lesson during a research writing unit; Murphy might be a mentor author for how writers reveal their interpretations of primary sources.

I’d also support students by explicitly pointing out how the photos, illustrations and additional features are helpful to a reader. For example, Murphy includes a map of the four by one mile stretch of downtown Chicago that was destroyed by the fire. At intermittent points in the book, he inserts the same map with a shaded area of where the fire had reached at that point in the book. There are photos of buildings that were taken before and after the fire. Murphy explicitly states, too, that many of the illustrations drawn of people fleeing in panic revealed the drama of this event.

The Lexile measure for this book is listed at 1130; the “stretch” Lexile band for 6th-8th grade is listed as 925L to 1125L. Other well written books that fall into this band (don’t let the band fool you, though) and that would require similar strategic reading include:

Don’t let a Lexile fool you. For example, I would say that Trapped is a more difficult text conceptually than The Impossible Rescue because of the content related to 21st century engineering.  I chose these books not because of the Lexile, but because they offer developmentally appropriate challenges for 6th-8th grade readers – they have complex, multi-layered themes and cognitively challenging content. If you have sophisticated intermediate grade readers – challenge them with these books as well – by reading aloud or suggesting for independent reading.

If you are going to teach with a particular title like this, I highly recommend that you read these book closely. That said, you don’t have to have read all of these books to confer with independent readers of these titles. If you understand how Murphy has structured The Great Fire and woven in complex themes, you will more easily be able to confer with students reading any of another number of titles. I’d suggest using The Great Fire as an anchor text for reading aloud and mini-lessons and then numerous other similarly complex titles for the bulk of the reading block – that students read independently with you there to coach as needed.

Okay…stay tuned…I’m working my way through more of the exemplar texts from Appendix B and will, no doubt, have more to say.