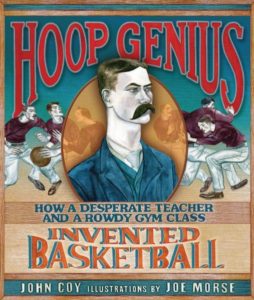 New narrative nonfiction that can be used as a mentor text for research and writing. Hoop Genius is a narrative about how basketball came to be – a gym teacher was trying to figure out how to engage a rambunctious group of young men in athletics indoors without harming each other. In simple prose, Coy tells the story of James Naismith who was trying to solve a problem. Many athletic sports in 1891 (soccer, football, etc) were not appropriate for indoors so he came up with the idea (and rules) for a basketball game. The baskets were peach baskets. The layout of the text is simple with 1-4 sentences on each page and the illustrations are dramatic, calling attention to the problems that Naismith confronted in helping these young men harness their energy. Actually, the illustrations are part of the flow of the text in that they give information that the text leaves out. For example, Naismith tries lacrosse with the young men and then stops the game. There is no text about why he stopped the game. You only know that the game was a disaster by examining the illustrations. There is an author’s note at the end which details how he interviewed numerous people and went to visit Naismith sites in Almonte, Ontario and museums and archives to gather more information. The end papers of the book are the original types rules for the game with Naismith’s handwritten signature – a great primary source.

My only caution with this book is that students might be confused by how grown up the “gym class” looks – there are players with mustaches. I’m inferring from the author’s notes that this was a class at the YMCA – not in a public school and therefore the “students” could have been young adults.  Not problem enough to deter me from sharing this with students. I just might need to explain.

What struck me as I read and examined this text was its potential as a mentor text for writing nonfiction narratives in the intermediate grades. A few thoughts:

This could also be a mentor text for research – discussing the author’s note and all of the resources he consulted. This might lead into listing resources the students might use including people they might interview. (This is after they’ve identified their topic, of course.)

AND I love the endpapers being a primary source. This could be used as a way to introduce students to incorporating primary sources into their research papers – even into the layout and design of their papers.

The illustrations– I’m not an artist, but there’s something about Morse’s choice of color palette (blues, purples, black) and the sketch-like quality and the role of the illustrations in bringing the text to life. I think there are some students who could grapple with this and apply their learning to drafts and final product.