Interview with Marc Aronson, author of Master of Deceit

In a previous blog, I reviewed the YA nonfiction book Master of Deceit: J. Edgar Hoover and AMERICA in the Age of LIES by Marc Aronson, a gripping chronicle of J. Edgar Hoover’s ascent to Director of the Bureau of Investigation in 1924 and his continued reign for the next four decades. Since authority and accuracy are two criteria for determining the quality of a nonfiction text, I’m always interested in how nonfiction authors go about their research. Below you’ll see how Aronson, who has a doctorate in American history and is a member of the graduate faculty in the library school at Rutgers, responded to my questions. His responses deepened my understanding of his commitment to well-researched texts with themes that are relevant to today’s students and affirmed for me the power of research to not just educate, but also surprise, “fascinate,” and “chill” a writer. The question for you, the reader, is – what are the implications of this kind of reader-&-author-experience for our students?

Sunday: In your analysis of the primary sources made available by the FBI, what surprised you?

Marc:  Actually I was most surprised and pleased by my research in their image files. It was both chilling and fascinating to read, for example, the transcripts of the Walter Winchell radio broadcasts with FBI notations – leads, carefully noted praise of Hoover, disagreements all showing the circuit between gossip, media, and the FBI; and even just  seeing the layers of approval every document went through – the check marks and scrawled notes – was a portrait of fastidious bureaucracy that gave me a feeling for Hoover’s rule (and gift for cataloging and micromanaging); the real treat for me was going through the FBI photo files at NARA. I am most proud of the image on page 71 – Hoover’s clutching hands – and I became attuned to how strange it was after looking through hundreds (if not more) of shots of him in the office being an official greeter. 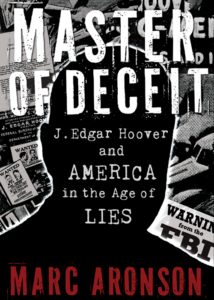 Sunday: How did you go about making choices for which primary sources to include in the book? Were there any sources you wanted to include but could not for some reason? Why?

Marc: No. There was nothing I wanted but could not use. Primary sources are a balance – they add depth and texture, so long as you (author) and you (reader) can see what is exceptional about them. The question is when does adding that context slow down or overwhelm the narrative and when does it enrich it? If they were less expensive I might have used more movie posters in order to immerse the reader in a sense of time and place. I am proud of how we used popular culture in the book, but it would have been nice to add even more.

If I am reading your question correctly I think you are asking if the FBI restricted me from access to, or the right to use, anything. The answer there is no. I considered filing a Freedom of Information query about me or my father, but I thought it would take too long to get an answer. One of the historians who vetted my book got access to the FBI’s “obscenity” files and is writing a book on that, but it is also true that Athan Theoharis, the great authority on Hoover’s FBI, has fought a lifelong battle to get access to, and make sense of, the byzantine files. I had the benefit of following the trail he blazed.

Sunday: There was a point in the book where you chose to remind the reader that you, the author, are telling this story from a historian’s perspective. (See page 43, “My view, and that of most historians, is that Hoover did not have a sexual relationship with Tolson.”) This jumped out at me because you did not mention your perspective as a historian or what historians “agree upon” in the rest of the book and, yet, there must be other information in the book that is generally agreed upon as being true. Was this positioning intentional? Purposeful?

Marc: The question of his sexuality is such an issue (for adults who come to Hoover with presumptions) that I wanted to make two things clear: my judgment (I am the author, this is my book, my reading) but, also, the consensus of scholars (this is not just a personal impression, it has the weight of academic inquiry behind it). The deliberate statement there was a counter to what I assumed would be an assumption from some readers that Hoover was gay and that I was misguided or covering up.

Sunday: Your manuscript was probably completed up to a year before it was published last spring (2012). I’m wondering what national or international events that have occurred in the meantime resonate with you – regarding the lessons we have learned from Hoover’s story. Where and how is the same kind of fear playing a prominent role in critical events? Maybe more so than in others?

Marc: Well just a couple of week’s ago the Petreaus email issue brought up the question of what the government can find out about you – the whole blur of public and private in an age when tweet, txt, and email in many ways replace verbal conversation. (Note from Sunday: Marc responded to these questions in Nov. 2012.)

Sunday: In the epilogue, you write “But this book is not and should not be just about Hoover” (p. 191). What would your advice be to teachers on how to meaningfully extend the ideas in Master of Deceit beyond a typical classroom discussion?

Marc: What makes us feel safe now? What scares us? How much of our private lives need we expose to scrutiny to give the government the power it needs to safeguard us? But when is safeguarding smothering? Like the parent who justifies reading her daughter’s diary to make sure everything is ok – when is that an intrusion and when good parenting? Shift that from the personal to the public, what does our government have a right to know? About you, about everyone, about minorities, about outsiders, about people who dislike the govt? 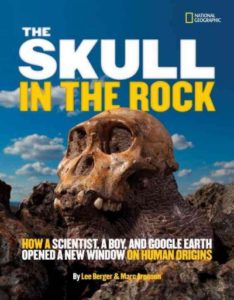 Sunday: You’ve tackled a wide variety of topics in the last three books you have written for young adolescents – the international and historical influence of the sugar market, the trapped Chilean miners, the history of the FBI. Despite the difference in topics, each book has a clear message advocating for change, a change in how we think and how we act. Your books could easily be used to help students grapple with essential questions around universal themes. This is part of the appeal of your books and I know that your readers eagerly await your next publication. What’s next for your readers?

Marc: I have a middle grade book that came out this fall called the Skull in the Rock, about a breakthrough in human evolution that began with a discovery made by a 9 year old – the advocacy there is to get young people out observing, exploring, and asking questions. I have 3 coming out in 2014: a book about a woman who figured out how to connect specific myths (griffin is the most famous) with specific fossils (protoceratops) – again about asking questions, being willing to challenge beliefs, trusting yourself to keep searching; Marina and I are co-writing our second YA – this about 3 photographers who invented modern war photography and photo journalism during the Spanish Civil War – Robert Capa, his sometime lover and equal partner Gerda Taro, and their mutual friend Chim (David Seymour); this is a book about artistic collaboration, about men and women, about war, and about the risks involved in being the Eyes of the World (the title) – all well-suited as a book for us to write together; and Charles Smith and I co-edited a second fiction anthology/novel, but unlike Pick-Up Game this is not about sports, it is about YA initiations – in the many meanings of that word.

Sunday: As implied in the previous question, your writing is a form of activism. Do you believe educators of young adolescents should see themselves as activists, too? Why or why not?

Marc: Every year when I train future librarians in my Rutgers MLIS classes, two units surprise them and move them – when we read books on war, and when we read books on civil rights. In both cases I am teaching my students to bring the idea of activism to the young people they will serve. Young people need to know they can speak up and make a difference – but what they choose to make as their cause(s) is up to them. I just want to be sure they realize it is possible – the world is not set, it is theirs to challenge and change. Maybe the key word is agency, whether it is as a reader questioning a text (mine), or as a student signing a petition, or taking a photo of something the world needs to see (a crime, an ecological violation, a fascinating fossil, a beautiful expression on a child’s face) young people need to know that their voice, their ideas, their curiosity, their doubt counts, it matters. They need training, of course, in how to think, how to question, how to frame debates. But the impulse to stand out, stand apart, and speak out must be nurtured – and that runs through everything I do.

I went to a pure Dewey progressive school K-12. It had good parts and bad. But one thing they emphasized over, and over, and over was our right to question and debate. And I treasure that and want to pass it along.

A special thanks to Marc Aronson for helping me with the first author interview on this blog! And to my dear colleague and friend, Junko, for introducing me to Marc!